When you have lived in a place for a while you stop noticing the strange things that once used to leave you wide mouthed and confused.

I have vowed to try and reignite my interest in all things weird and wonderful, and of course will be sharing my discoveries with you.

And so, for my first random item I give you SuperPlacenta, available at a 7-eleven near you (if you happen to live in Thailand)!  This beauty serum is apparently made from the afterbirth of a sheep.  The lambs certainly add an element of cuteness.  I have no idea what miracles this elixir promises to perform, but I wasn’t convinced enough to purchase it.  Because, placenta.

Three years ago today I did my very first TEFL lesson as part of my placement on the TEFL Heaven course in Koh Samui.  Facebook very politely informed me at the top of my news feed today.  Good old Facebook memories feature, constantly reminding us of the wonderful things we have done in days past, and also some of the not so nice things which you can then delete and forget about forever.

This was my first proper lesson on placement as I was also being observed.  I can remember being a mixture of crazy excited to be getting in the classroom and crazy nervous at having to teach such little children.  I was a well seasoned youth worker but my main clientele were 17 year old young men and somehow I found this group of 8 year old more intimidating…

Anyway, seeing this come up on my Facebook news feed this morning transported me to where I was three years ago, and how things are so very much not what I expected them to be now.

If only I had a time machine, I could go back and tell myself…

Guess what?  You’re never going to go home!  That’s right, you may think that you are only going to stay in Thailand for a few months but so far you have now stayed for three years and you aren’t showing any signs of leaving yet…

You’re about to be told where you are being placed for your long term job.  Do not, I repeat DO NOT tell mum to google ‘Hat Yai’, because the only results are about the bomb that went off a few months ago and she is going to go spammy.  Send her some nice links instead.  Soon enough when you Google ‘Hat Yai’, your (currently very young) blog will be in the results, sometimes #1 – yay you/me/us (this time travel stuff is confusing)!

Don’t worry about the bomb mentioned in my previous comment.  None will go off while you are there.

You will never believe where you are going to end up living – only bloody Phuket!  I know, I know, you have sworn to never go there.  But it will all make sense when the time comes.  And trust me, you can earn more money and go to the beach more often.

You are going to become overrun by pet animals.  I kid you not.  Get ready – you’re about to become an animal lover.  I know, it’s ridiculous.  But Thailand is going to change you.  Just wait and see.

I was so fresh and green back then, with half a plan of returning to my old job in a few months… little did I know.!

‘They’ (whoever ‘they’ is… the blogging Gods?) say that you should try to engage with your readers on multiple platforms and be accessible from many angles.

So, let me shamelessly plug the fact that my blog is also on Facebook, and you can click here to head on over there and give the page a like.  I share more than just what I post on here as Facebook is much easier to use (also because I am on Facebook pretty much all of the time) plus I tend to be around more to answer comments and generally have a nice chit chat.

One of the mums at my school is making a series of videos* asking people What makes you smile about Thailand?  Earlier this week she coerced a group of us to have a go in front of the camera… and I did completely rubbish!  There I was, a true lover of Thailand, I’ve written countless blogs about why I live here and how amazing it is (alright, I have also written a fair few that say the opposite…) and all I managed to string together was a few feeble sentences about the animal life here.  FAIL.  In my defense, it was the end of a particularly long day of meetings and running around.  But I do feel the need to redeem myself and show some love to Thailand.  So here it is – my top five reasons why I love living in Thailand.

* Videos that you will NEVER be having a glimpse of following my poor performance.

1.  You can break the rules. I’m not making any claims of being a major rebel without a cause, but there’s something exciting and freeing about knowing that the rules here are made to be broken.  If there are rules at all.  Need to move the contents of your entire house balanced on your moped?  Go for it.   whole family on one bike?  Why not!  Health and Safety – what’s that?  It probably makes for a very dangerous existence, but I much prefer it to the red tape of the UK.

2.  The food.  ALL of the food.  My belly may not love me for it, but I just can’t say no!  Before I left the UK I was a crippingly picky eater – while I may not be embracing the pig’s entrails or the chicken’s feet, I am most certainly loving the food out here.  Thai food is spicy and fragrant and sour and spicy and sweet and did I say spicy?  And don’t get me started on the amount of fresh fruit available – I have recently developed an addiction to dragonfruit – one a day for about three weeks.  Still waiting for a polka dot poop though.

Admittedly, this is Indian food… but still in Thailand, cheap and waaay better than anything I have ever had at home.  Not to self – photograph more Thai food before inhaling it…

3.  The weather.  OK, I didn’t want to be a cliche and here I am saying I love the food and the weather… but it is true!  Admittedly, I have a particular issue with rainy season that i have (probably incorrectly) attributed to Seasonal Affectiveness Disorder… but when it is dry and sunny it is just THE BEST.  Especially since I made the move to Phuket.  Beaches on my doorstep.  Yes, it can get TOO TOO HOT in April, but as long as you choose to lay in the sun in easy reach of some sea/swimming pool/[insert any body of relatively clean water here] you’ll be alright.  I mean, we can have BBQs for about 8 months of the year.  Beat that England!

I took this picture last month in rainy season.  RAINY season.  The sun even manages to be better than your average summer day in the UK during the rainy season.

4.  My animals.  One of the great things about living in Thailand is being able to rent a lovely house on an amazing bit of land and having the freedom to have my own animals.  Back in the UK I lived above a shop of rented a house where I was admittedly allowed pets but they weren’t allowed to be furry and had to live in a tank AKA no fun.    I love being able to have my cats and my Patchy dog and now I have added a flock of chickens to the mix because, why not?  The best bit is that most of my animals have a pretty cool story attached to them, being rescues or found abandoned or simply adopting us out of the blue.  I love that Thailand had made me love animals!

5.  Mai Pen Rai!  I wholeheartedly appreciate the mai pen rai attitude to life here.  Mai pen rai = no worries, forget about it, it’s aaaallll good in the hood.  Thai people are smiley and friendly and more often than not, willing to let things go when you pull a cultural boo boo.  Living in a land where it is very easy to slip up and potentially offend (and I have a post coming very soon just about that so watch this space) that is a very welcome approach to life!

Tomorrow is another day… mai pen rai to the troubles of today.

Just as I was about to post this, I noticed that my friend and fellow Hat Yai Mad Hatter posted exactly the same thing on her blog last night!  That is some spooky, next level, parallel universe kind of stuff going on there.  Head on over to check out Teacher Cola’s blog – she’s braver than me and even makes YouTube videos too!

Why not join in and leave a comment below on what makes you love where you live…. 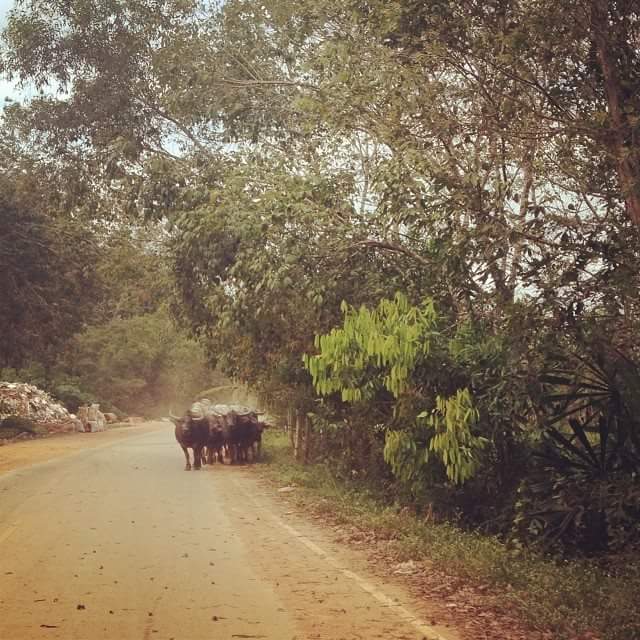 Since I have moved to Phuket I have a new found appreciation for what was an idyllic route to and from school, meandering through rubber plantations and farmland with only the odd herd of buffalo in the way of traffic.

That commute there in that photo?  That’s one thing I miss about living in the deep south.