I’ve decided to do a monthly roundup each month (funnily enough…) of what I’ve been doing in the various classes I teach at school.  For those of you reading this thinking about making the move to teach abroad, this might give you a fair idea of an average teaching gig in a government school in Thailand.

With a combination of protests, national holidays and school activities, I didn’t manage to teach a full 5-day week at school the entire month (hey, TIT – This is Thailand – what do we expect?!) so I didn’t manage to cover absolutely everything with every class.  My poor classes I teach on Friday probably won’t recognise me the next time I walk into class!

Our first topic for the year is ‘Jobs and places of work’.  Luckily for me I’ve been at school for a full academic year now so I’ve taught this before.  In fact, it was the first topic I had to teach when I first started at school, which feels like an actual age ago.  With a solid year teaching at the same school/level and a new partner teacher (at my school, many subjects are split between two teachers who plan lessons together) I have scrapped much of what I did last year.  Last year we did what we were told (we were new!) and used the textbook – this year I’ve got the confidence (and common sense) to cast aside the text book and go with what I know in my own head instead.  Wow, confidence in one’s own head – I have come so far.

With my regular classes (AKA, not special, not paying, not receiving AC, clean classrooms or any classroom facilities beyond a whiteboard and maybe a board rubber) I have been looking at these questions;

What is his/her job?  What is your mother/father’s job?

Where does he/she work?

Well, with a combination of all those days off I already mentioned PLUS having to carry out midterm re-tests in class time (again, TIT – we re-test until students pass) there really wasn’t much time for anything else.

We chose some simple jobs rather than those suggested by the helpful textbook as in my opinion it’s more relevant to know the words for say, chef or mechanic than astronomer, engineer or philosopher.  Let’s learn to crawl before we attempt any upright travel.

I used flashcards (printed in colour – a landmark moment in my time at this school) created using clip art from an artist whose images I seem to recognise from my time as a student – Philip Martin.  His website is full of royalty free images covering an endless amount of topics.  I think it’s always nice to have a set of flashcards that match rather than a mash up of images stolen from Google.

As I started teaching it transpired that the students had touched on this topic before with their Thai English language teacher, so they picked it up nice and quickly, and new some of the words already.  One day there will be communication between the Thai teachers and the farang teachers but until then it’s nice surprises like this that remind me that someone else actually does teach these kids English aside from myself (although it often feels like I am on a one-woman mission).

I printed out some time filler worksheets that can be found here for the quicker students, keeping them occupied and increasing their vocabulary knowledge in the topic, and avoiding them getting bored and disrupting the other students.  I have learnt to be prepared!

With the special classes (AKA pay a load of money, less students in the class, nice facilities, more lessons…) I also looked at combining different jobs with personal qualities e.g A fireman should be brave… A doctor should be caring… but apparently most of my students believe that you should be beautiful to be any job.  Maybe that’s the case in Thailand.  Hey, I’m employed so I’m not complaining.

I also teach additional writing classes to some of my ‘special’ communication classes, so I decided to use some common sense and expand on the topic of ‘Jobs’ by looking at writing a short piece using the future tense – What I want to be when I am older.

The students should be giving in their completed final copies (beautifully illustrated of course) this week so watch this space for some pictures of their work.  One thing I can say is that the majority of Thai students love to create beautiful work especially if there is a chance that it may be included in this month’s display (I have commandeered two display boards in the corridor to display some of my student’s best work).

What were the most popular jobs for the next generation of Thailand’s workforce?  For girls – air hostess or tour guide, for boys – policeman or… policeman.  I also had an astronaut – perhaps she will settle for air hostess like her peers.  I don’t think Thailand have a space exploration programme just yet.  But who am I to crush the dreams of aspirational twelve year olds?

I also teach writing to the Matthayom 2 students on the International Programme; all three of them.  Actually, because of their high status as IP students, they are often caled on to represent the school at competitions and events, so there are often only two students in class, and twice this month only one – I guess it was like a free private lesson.

These students are a little bit older and a lot more advanced.  In fact, one of them is near-on fluent.

Throughout January I only saw them four times as a whole group (or trio – can three students really be called a group?) so we didn’t cover much.  We looked at first and third person narratives in preparation for their upcoming writing assignments which will be to write both a personal and fictional narrative.

I used this worksheet; English Writing – The Narrator that I created using different things I found on the interweb, feel free to use it too.  I actually found that once the students had figured out that there is a similar rule to narrative writing in the Thai language, they totally got this, so we were able to extend discussions away from which pronoun I should use where to the pro’s and con’s of each narrative and the difference changing perspectives can make.  Pretty deep for the Thai classroom.

Some students are taught reading and writing separately, some a taught it combined… who knows why.  I teach the combined subject to the Mini English Programme 2nd years who I have taught since day one.

I have a pretty good workbook (praise the resource gods) that I actually use for this subject and so the unit for this month was ‘Film reviews’ – an excuse to watch some of the best scenes from Jurassic Park and for me to hijack the lessons and basically teach media studies (my favourite subject as a student).

We looked at the different aspects of a film review, the difference between fact and opinion and some key words that were specific to the topic such as director, special effects, setting, characters, plot… it was really good fun and again, hopefully next week I should have some pictures of some film reviews created by the students.

And we watched this, the greatest movie scene from my childhood;

Every Wednesday afternoon we have to run a range of English clubs and I am on the team of the singing club which is basically an excuse for me to bang out some karaoke for an hour.

We only met properly once this month and our song was Katty Perry’s ‘Roar’ which has super easy lyrics and is really fun to sing (or, in most cases, SHOUT).

On Friday we were informed that again, we will be having classes cancelled throughout the month.  This time around they have arranges this in advance (hurrah!) and so we are at least aware that our time is limited – so much so that during the next month we will only have 15 days of actual teaching.  As February is the final month before exams and the end of the academic year, this means that there are only 15 actual teaching days left this academic year!  I had had plans of making a school newspaper (now on the back burner) alongside some other things that simply won’t be achievable in the time frame – some of my classes I am only going to teach another three times before their final exams.

Rather than cramming in a month’s worth of teaching into two weeks, I’m probably going to spend the month enabling the students to produce some work using the language that we’ve covered the entire year.  It will be nice to have the time to do it properly rather than tacking it on at the end of each unit.  Usually my school expect a unit per month so it’s nice that they have actually said we don’t have to squeeze one into a few weeks.

Apologies if this has been a bit long, and thanks if you perservered and made it this far!  At least next month’s round up will likely be very short!

As a reward for reading right through to the end, here is a funny cat picture, because we all love the cat lols. 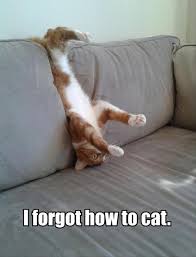