It’s my last full day in the UK today and so this morning I visited my grandparents in their respective residential homes and said my goodbyes.  Those places are fantastic for people watching – full of real characters, and some people who are probably only a shodow of their former, younger selves.

It reminds me of a poem that I read as a child and that has always stuck somewhere in the poems that may one day become relevant compartment of my mind.

When I am an old woman I shall wear purple
With a red hat which doesn’t go, and doesn’t suit me.
And I shall spend my pension on brandy and summer gloves
And satin sandals, and say we’ve no money for butter.
I shall sit down on the pavement when I’m tired
And gobble up samples in shops and press alarm bells
And run my stick along the public railings
And make up for the sobriety of my youth.
I shall go out in my slippers in the rain
And pick flowers in other people’s gardens
And learn to spit.

You can wear terrible shirts and grow more fat
And eat three pounds of sausages at a go
Or only bread and pickle for a week
And hoard pens and pencils and beermats and things in boxes.

But now we must have clothes that keep us dry
And pay our rent and not swear in the street
And set a good example for the children.
We must have friends to dinner and read the papers.

But maybe I ought to practice a little now?
So people who know me are not too shocked and surprised
When suddenly I am old, and start to wear purple.

Because you see, when I am old I hope to be eccentric, full of as much life as I can be.  But I don’t think it will come as a shock to people, not really.

In the previous lesson I introduced the concept of onomatopoeia and we looked at examples of sound words and their uses.  In this lesson I wanted the students to apply the new words that they had learned.

To start the lesson I played the audio only of the video below.  I didn’t tell them any information about the video, just asking them to listen carefully and think about what they can hear.

We listened to it another time, and this time I encouraged the students to think about what sound words could be used to describe the sounds we could hear.

We then listened for a third and final time, followed by a brainstorm on the board about what the students thought they could hear.

Some things that the students thought that they could hear included;

After a good discussion about the sounds that we could hear and what they might be, I finally played the video on the projector screen for all to see.  The students were really excited to find out what the sounds were and they were surprised to find that they were all different types of fireworks.  As we watched the video I pointed out the different sound words as they appeared.

I then handed out this worksheet where students needed to think about sound words (onomatopoeia), action words (verbs) and adjectives that could be used to describe the fireworks in the video.

I then asked students to come up with five descriptive sentences using the words on their worksheet.  For students that find free writing a little more challenging I wrote a few sentence structures on the board to help them;

This one in particular impressed me as the student had created rhymes and a good rhythm which I hadn’t asked for.  Although it wasn’t strictly a shape poem…!
I have a lot more that I want to take some pictures of but I went and gave them back to the students before I had thought about getting a few snaps!  Hopefully I will be able to add them at a later date as there was some really impressive work.
This was a really fun couple of lessons covering a subject that an ESL teacher usually wouldn’t have included in their curricculum – the beauty of being left to my own devices.  Some people find the thought of teaching creative writing a bit daunting but hopefully this goes to show that if you simplify and break down the process you can have entire classes of students creating wonderful pieces of writing!

This is the second lesson of two that I taught within the topic of onomatopoeia.  If you would like to check out the first lesson, click here. 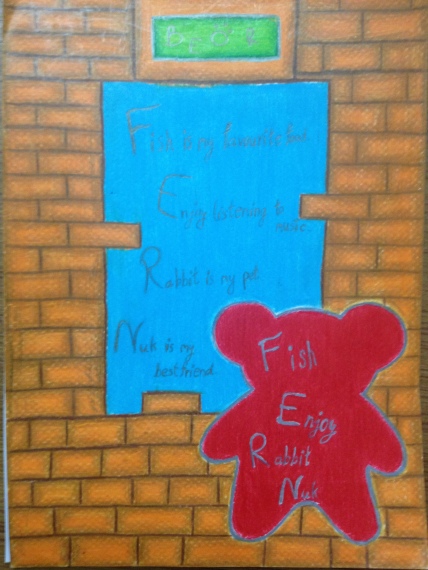 Don’t you just love it when you can set homework and it gets completed and handed in on time?!  OK, so these are M2 students on a special Mini English Programme so they are more studious than the average… 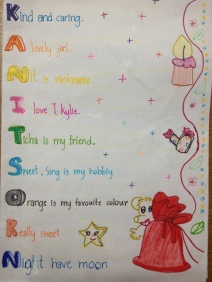 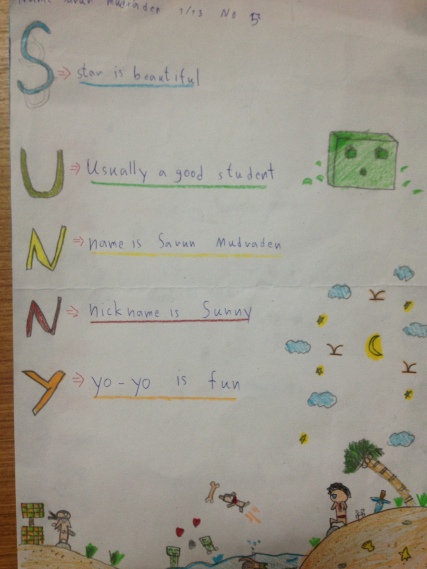 Remember writing an all about me acrostic poem when you were a kid?  I always found it hard to think of words for the letter K other than ‘kind’…. ‘kissable’… I may have even once resorted to ‘Kool’ with a K which is neither cool nor correct.

This past week in my Writing classes we have been creating our own acrostic name poems using the personal adjectives that I have been teaching in Communication.  It’s nice to have a bit of cross over between the two subjects so I’m glad that I teach both to a couple of my classes.

My Matthayom 1 students did a wonderful job at brainstorming and creating their poems and decorating them for homework.  Somehow the warm up task of writing an alphabet of adjectives on the board turned into a mini-competition with students fighting over board space and marker pens; I swear anything that involves writing on the board is super exciting to these kids – on Friday we had a bit of a free fun lesson as we had completed the first unit and had a lesson to spare, and I told one of my classes we could play any game that they liked and of all the fun activities I have done with them they all wanted to play a word game that involved writing a noun, verb, adjective, animal etc. for a given letter.  They could have played ANYTHING and that is what they desperately wanted!  So my free fun lesson kept it’s educational element after all!

Here are some of my favourites; I especially like the poem written by a girl named Beam who lists ‘A smart girl’ immediately followed by ‘Modest’.  I think the irony was lost on her.  Some students didn’t grasp the concept that the poems were supposed to be within the topic of ‘all about me’ and simply wrote any old sentences – “Ants are small animals”, “Needles are very sharp” or simply “Umbrella”; although I’m sure the latter could be considered modern minimalist poetry in some circles!

Just a note if you are a fellow teacher thinking about doing this activity with Thai students; some Thai nicknames are 2 letters long such as ‘In’ or ‘Fa’ and so I said that they had to  use their full name, which in Thailand is often 10, 11 or 12 letters long such as ‘Warrissara’ or ‘Kannichorn’.  I set the minimum word count at 4 letters so unfortunately some students in the class only had 4 letters to write sentences for and others had 10+!!!  Also, have a dictionary to hand as there are a lot of tricky letters that crop up time and time again in Thai names and I struggled to think of different adjectives for some of them!

I look forward to collecting the completed poems from the Matthayom 2 students on Tuesday and will post any favourites again.

I was sitting eating breakfast and I felt all poetic all of a sudden… here you go:-

Mr. Thailand.
With your chicken Pad Thai, your banana pancake, Mr. Thailand.
Wash it all down with a sugary shake, Mr. Thailand.
Oh, Mr. Thailand, you’ve been there and done that,
Bettered us all searching off the beaten track.
Kick back, grab a cushion, put up your feet,
Bare your dirty sole to the world, to every person you meet.

Oh, Mr. Thailand, it’s time to go home.
Wave goodbye to your old trusty Khao San road.
Get that exit stamp, Mr. Thailand, give one final wave.
What a life changing experience,
In only 30 days.