Time for another halloween themed video lesson with this short film:

Play the clip to students, then hand out a comprehension sheet and play it again (I find I have to let them watch first without having 30 pieces of paper flapping in people’s hands).

The language is really simple and has handy subtitles so you could easily adapt your questions to suit any ability.

Here are some example questions to get you started:

What date is halloween?
What vegetable are they carving into a lantern?
What are they carving the pumpkin into?
What do they put inside the pumpkin?
What does fancy dress mean?
What is the boy dressing up as?
What is the girl dressing up as?
What time do they get changed into their outfits?
What other outfits can you see at the party?
What fruit did they play games with?
What is apple bobbing?
Who comes to the door?
What do the trick or treaters say?
What do they give the trick or treaters?

Depending on the level of the class you could choose to use multiple choice questions, open questions or a mixture of both.  With lower ability classes I often go through the video and pause it at specific points to give the students a chance to read the subtitles fully.  If you make sure that your questions run in chronological order you can pause the video as each answer crops up to make it even less challenging.

A further activity that you can do for advanced students with any video comprehension lesson is to have them write their own questions for a partner – students love to play teacher every now and then!

This super catchy song is perfect for beginner ESL classes; it’s simple, fun and I warn you now it will get stuck in your head – apologies in advance…

Play the song to the class and go over the key vocabulary on the board;

Then use this fill in the blanks lyrics worksheet and go through the song again a few times until the students are happy with their work.  You can keep the key words on the board to help them.

Finally go over the answers and have a good old sing song!  Students particularly like the video and often ask for it to be played as a reward at the end of a lesson – a sure sign of success for this activity.

You can also use this song to introduce simple rhymes and opposites, or just as a bit of fun.  Enjoy! 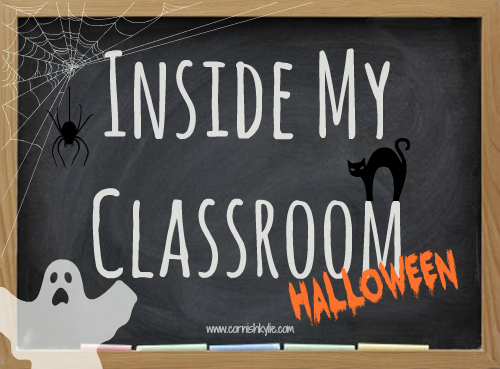 With Halloween just around the corner why not incorporate some spookiness into your lessons?

Here are some short films that are excellent prompts for a goulish creative writing lesson;

Take a trip with a young boy to the museum to look at the dinosaurs where things aren’t quite right.  What happens next..?

Venture inside a spooky cave, what will you find inside?

Journey through an old graveyard, where ghosts and ghouls lay behind the gravestones…

As the videos have no spoken language in them they can act as inspiration for all abilities and incorporating any vocabulary or writing techniques that you have been teaching.  None of them are overly scary, most of the spookiness is up to your imagination, so they are fine to use with younger children.

Students can be shown a film and create a story board, rewrite what they saw, predict what happens next or make an alternative ending.

This video has been doing the rounds on Thai news websites and a number of TEFL teaching groups I’m in. Watching it, I was taken back to many a moment in my own time TEFL teaching in a Thai government school!

A loose translation of what the boy is saying, courtesy of Bangkok Post:

“They’re hiring you to teach. Why the &*$@ do you scratch your foot? Do your work! This is my country. Understand? I’m scolding you and you still don’t look at me. Animal! Monitor Lizard? Look at me!

“You’re wearing black. Are you going to your father’s funeral?

“You’re scratching your foot again. You have no manners.”

Although these words might not appear hugely offensive, cultural differences need to be taken into account.  For example, you do not want to be called a monitor lizard (or a dog, or buffalo equally) in Thailand.  The Thai word for monitor lizard, เหี้ย – hia (sounds like ‘here’) – is a very insulting name reserved for the worst of the worst.

He is clearly highlighting the fact that she has no idea about his country, referencing the fact that she is wearing all black (very much reserved for funerals only) and her foot scratching (feet are the dirtiest part of a person and should not be exposed or touched in public).

Thailand is still very traditional in its hierarchy, with regards to age and social standing.  A person who is older than you, and who is your teacher, should be respected – unfortunately the fact that the teacher in this video is foreign means that this basic social rule is turned on it’s head and is captured on video for all to see.

In fact, it’s not the fact that she’s foreign at all, it’s the fact that she clearly doesn’t understand a word of what he is saying.  But even if she can’t understand, part of me hopes that the mannerisms of the boy, the way he is talking at her, sneering and laughing – all of these things would have made me as the teacher realise that he was more than likely being rude.

I’m not saying there is anything wrong with what the teacher did.  I’ve done my own fair share of ignoring the negative behaviour to try and not give it the attention it so desperately seeks.  But if she had just looked up from her marking, had taken in the situation, perhaps she could have reacted in some way.  It’s not always about knowing what is being said; the way it is being said and the reactions of others can often be enough to understand.

When I was fresh in the TEFL game my old trick was, if I got the impression that a student was being rude in class (whether about me directly or not) I would pretend that I understood, would looked shocked and would let them know that I wasn’t happy with that happening in my classroom.  Nine times out of ten the student would be guilty and would apologise, the odd time I was met with huge protests and realsied that I had probably got the wrong end of the stick, I listened to their explanation and let it go (even if I still had no idea what was being said!).

The sad fact is that this video is not an isolated event.  The Thai government classroom (at least at high school age) is full of students shouting unknown things either at the teacher or across the room.  If I were to play devil’s advocate I could say that this is a natural reaction of a teenage boy who has a foreign teacher who doesn’t know the first thing about his country or his language.  Perhaps TEFL teachers should be better prepared during training to be able to spot this kind of behaviour, or should understand enough Thai to be able to listen out for insulting or rude language.  But the fact is that this would categorically never happen in a classroom with a Thai teacher.  Was it her lack of knowledge?  Or a lack of manners on his part?  Wherever the blame lies, it shouldn’t be happening in any classroom in any country.

Have you been in a similar situation?  How did you react?  How would you have reacted if you were the teacher in this video?  I’d be interested to know – please share in the comments below.

There is a whole range of ‘… in Britain’ videos on YouTube that, although a little dated, are perfect for use in the ESL classroom.  I found that the level of language was perfect for my students, and the options for what you can do with the videos is endless.  Most of them are subtitled too which really helps the students to follow.

In this particular video, Food in Britain, we are taken on a culinary tour of traditional British food.  The students found it really interesting and it generated a lot of questions.

What I have done with this video in particular is play it to the students and follow it up with a video comprehension.  This can be either written or oral.  Below is a list of questions that I have used alongside this particular video:

Other extension activities that could be done include;

This is part of a new weekly feature – Teacher Tuesday – make sure you come back next week for another lesson idea.  If you have an idea to share as part of Teacher Tuesday feel free to get in touch